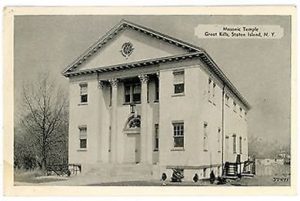 During February and March, 1913, meetings were held to develop the possibility of a masonic Lodge in the Great Kills area of Staten Island, New York. The Grand Lodge of Free and Accepted Masons in the State of New York granted authority for the establishment of the Lodge, to be known as Great Kills Lodge, and a communication was held in the Stapleton Masonic Temple on Monday, January 12, 1914 to organize the Lodge.

The First Stated Communication of Great Kills Lodge UD (Under Dispensation) F & AM was held at 22 Hillside Terrace, Great Kills on January 15, 1914. Many of the members volunteered their services, both in time and money, in order to obtain the necessary paraphernalia to furnish the Lodge. On January 15th and 22nd of that year the first members were proposed for Initiation.

On November 10, 1921, the Building Committee recommended the purchase of the property on the corner of Amboy Road and Lindenwood Road in Great Kills. This property was paid for in full that December and the Lodge was flourishing with 206 Master Masons as members.

A Masonic Temple was erected on this property starting on October 13, 1925. The cornerstone was laid on April 3, 1926 and the Temple was completed on October 11, 1926. It was dedicated on November 15, 1926. The Lodge continued to grow and by December 1931 there were 363 members however, during the 1930’s times were hard and the Lodge suffered greatly due to the loss of many members because of non-payment of dues.

By December, 1935 membership had decreased to 275 and the hard times for the Lodge continued when in 1940, the Richmond Insurance Company foreclosed on the mortgage for the Great Kills Masonic Temple. Four years later the Lodge had recovered sufficiently so that, in June of 1944, a committee was appointed for the purpose of buying back the Temple. On March 8, 1945 it was repurchased and the deed was recorded in the County clerk’s Office. By December, 1945, there was a noticeable but gradual increase in membership to the extent that by December, 1955 there were 406 members of Great Kills Lodge. the Temple mortgage was completely paid off and a celebration was held on November 13, 1958.

The Lodge continued to prosper for several years but by the 80’s, membership had dwindled to around 200 many of whom had moved South to warmer climates. The bowling alley that had been in the basement was removed and a portion of the building was leased out in order to gain revenue. By the end of the decade, with aging and dwindling membership, a building that had need for massive electrical, plumbing and heating repairs with no air conditioning or paved parking lot to attract banquet renters, Great Kills reached a crisis, and the building was sold in 1993.

Since the sale, the Lodge has prospered. While it is nice to have ones own building, Lodge membership is higher than it has been for years and the average age of the members is steadily decreasing as we attract fine upstanding young men most of whom are taking an active role in the leadership of the Lodge into the 21st Century. 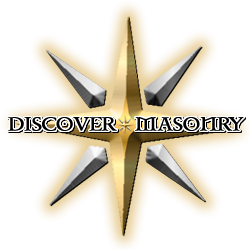